We didn’t leave Fairbanks for Hawaii or some other tropical locale this winter. Thus, Molly and I decided that we ought to head back to the lower 48 for a second round of backcountry skiing at the Bench Hut in Idaho’s Sawtooth Range, in what is evidently becoming an annual tradition planned by friends and frequent ski partners Casey and Helena.

After dropping off the dog, we took the red-eye out of Fairbanks.  Earth was in the midst of a magnetic storm, and the views of the Aurora out the plane windows was very unusual (more unusual was that they were in the southern sky).  12 hours later, we were in a sunny, snow-free Missoula; the snow line on the mountains was similar to mid-May of the previous year, and temperatures were in the high 60s.  Spring break!

We spent two days in Missoula visiting friends and packing for the trip to the Sawteeth (also climbing in Kootenai) before making the drive to an also snow-free Stanley, where we ate prime rib at the Mountain Village Cafe.

The skin to Bench Hut typically begins with two miles of flat on a closed road between the highway and Redfish Lake.  The morning of, we found that the road had mostly melted out, while remaining technically closed (or so stated the flimsy plastic sign planted in the middle of the ungated, two-lane, paved superhighway.  It would be a long and morale crushing affair to deal with skinning on asphalt at this time of morning, so we (were forced to redact our blog entries).

The remaining journey from Redfish Lake to the hut was straightforward, if a little bare in spots, but we made good time to the hut, reaching it by noon.  With sunny skies, but with a storm forecast for that night, Casey and I left immediately to pursue our primary objective of the trip, Mt. Heyburn, in good stability and weather, setting out from the hut just before 2PM.

Heyburn occupies the head of a large cirque, and has two summits which are split by the iconic north-facing Petzoldt couloir.  Unfortunately, to attain the higher western summit via the couloir involves either aid or a pitch of 5.11 (neither of which I am capable of), both on terrible rock.  Thus, we elected to circumvent this more direct, but less ideal route, in favor of the Stur Chimney on the peak’s western flank. 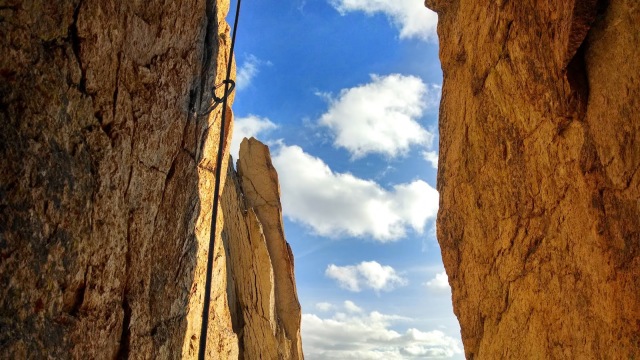 We reached the base of the technical portion of the chimney at around 4.  The chimney itself was bare, but the 4th and low-5th class slabs constituting the approach still held snow in gullies, and after ditching our snowboards, climbed a steep snow gully for a hundred or so feet before it petered out into a sketchy descending traverse along a snowy sloping ledge bisecting steep granite slabs.  After carefully navigating the traverse, we roped up for our first pitch of climbing, a short 5.2 step to reach the base of the Stur Chimney proper, which we climbed in snowboard boots.  Here, we transitioned to climbing shoes for the two pitches to the summit.  The chimney was snow free, but felt somewhat more difficult than the 5.2 advertised in at least one guidebook.  5.5 or 5.6 would probably be more accurate.  In any case, the going was easy, and we soon reached the summit of 10,299′ Mt. Heyburn.  As always, we spent little time on the summit.  Having only a 50m rope, we ended up making five rappels off of tat-shrouded bolts, a large chockstone, two aging pitons, a horn, and a small tree, respectively, to reach our snowboards.  The egress back to the hut went quickly, and we arrived just before dark for a hut to hut time of 6 hours.

That night, it snowed 6 inches, leaving pretty nice dust on crust conditions.  The next day, we (being a group of eight at this point) skied a beautiful hanging snowfield on a large fin above the gunbarrel couloir into perfect mellow glades.  The group split, as most folks went to ski the gunbarrel, and Molly and I went to check out the upper reaches of the next glade to the east. 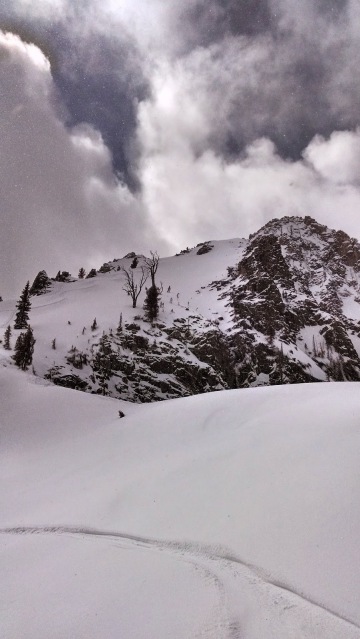 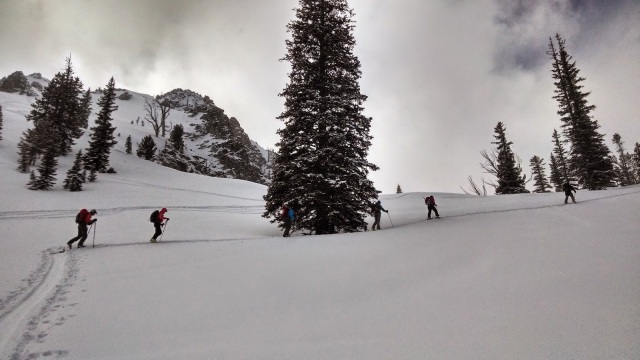 The wind picked up and the snow intensified into the evening.  By the next morning, there were 18 inches of wind deposited snow on lee slopes, prompting vigorous and spooky sluffs that were just on the verge of being soft slabs.  We skied carefully, and with the snow still coming down, stuck to relatively mellow lines.  Casey and I managed to make a foray up to Fishhook point, Heyburn’s lower cirque-mate, but got only marginal views through the storm (though an  excellent descent).

By the next day, the wind and snow had abated, but had left behind full-on deep and noisy wind slabs, slamming the door on the possibility of ambitous lines or far-afield tours.  Thus, we climbed Fishhook point once again, admiring the tracks of one seriously hard-assed mountain goat, and generally enjoying the nice views of the high peaks of the Sawtooths. 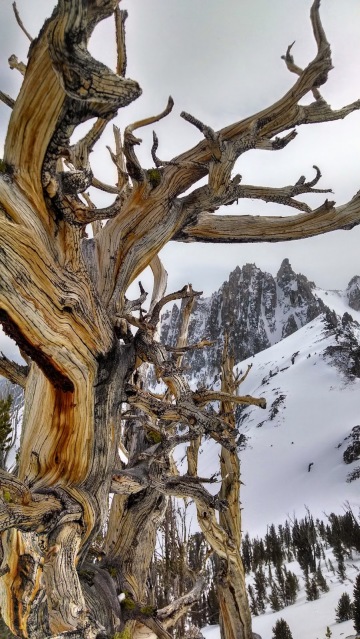 The next day we headed back to Missoula.  I spent another few days climbing at Mill Creek, and went on a nice bowl-bouncing tour up Camas Peak in the central Bitterroots, before flying back to Fairbanks, just in time to catch the tail end of the meltdown.  Where did all the snow go?