I finished out my week with two long runs with very different characters.
Cumulative weekly stats: 90 miles, 22hrs, 25000′ of gain.

7.11 Stuart Peak, 19 miles, 4600′, 3:05:
Morning cruise to the top of Stuart Peak and back.  This trail is really perfect for moving quickly.  There are no rocks, the grade is pretty uniform, minimal deadfall, and no views before the summit.  I used the descent to work on maintaining a sustained fast pace, averaging between 6 and 7 minute miles, which is really fast for me, and felt surprising good at the end.

7.13 Bear Creek to Big Creek via Idaho, 31 miles, 8500′, 9:30:
This is a logical albeit difficult run that connects two of the bigger Bitterroot drainages.  I left my road bike at the Big Creek trailhead locked to a hitching post before starting up the Bear Creek trailhead 13 miles distant.  I headed up the alternately rocky and smooth trail, climbing over occasional deadfall.  Despite this being a popular trail, it has not yet been cleared.  I made it to Bryan Lake in a bit under 2 hours (8ish miles, 3000′):

My energy level was pretty low at the start of the day, maybe from the fast running of the previous few days, and my legs were…  balky?  They felt better after the lake and drinking alot of water.  I made the class 2-3 climb up the west ridge on Sky Pilot and hit the summit at 3 hours flat.  Henceforth, the route was terra incognita.  Descending into the unnamed creek from Bear Creek Pass was fine, with just a little bit of talus hopping to avoid some large snow patches.  Once off the headwall, the trail was decent, but starting to become overgrown, and I had to backtrack more than once after going off on game trails that were more distinct than the real trail.  The views were lovely though, and it was fun to be so far back in a place that I can basically guarantee no one has visited yet this year:

Deadfall here was managable until the 6000′ level, where both the deadfall and the overgrowth of the Idaho jungle into the trail made things slightly difficult. I was expecting the trail up Packbox Creek to be better, since it is ostensibly the more popular point of access between Montana and Idaho.  I came to learn that this is not the case, and that neither trail has been cleared in a number of years.  Packbox Creek’s trail was very difficult.  Whatever drainage structures existed have become useless, and the amount of brush encroaching on the trail made running impossible.  I felt like I was walking through a creek bed, but it wasn’t possible to say for certain because I couldn’t see my feet.  In many places, the trail was incised two feet.  Additionally, there were more than fifty trees over the trail.  Alas, I eventually made it above the brush line and resolved to run the remaining 1000′ of steepish vertical up to Packbox Pass, simply because I had not been able to at all down lower.

I had intended to try and follow the ridge from the pass back to Ranger Peak, but had known from the outset that it might not go.  This was confirmed upon attaining the first highpoint along the route: 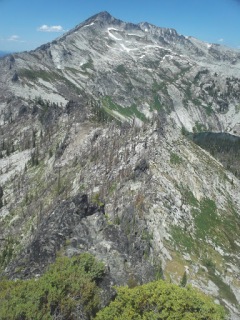 The ridgeline to Ranger Point was guarded by many unavoidable 5th class gendarmes.  I hemmed and hawed a little bit before admitting that the exposure was more than I was comfortable with, given my fatigue level.  So I enjoyed the views and started descending towards Big Creek Lake (Reservoir?):

This was the worst section of the trail for deadfall, in some places stacked 10 feet high, with thick brush precluding going around.  I would guess another fifty trees need cutting in this 1 or 2 mile long stretch.  I ran into an old time Bitterroot horseman camped on Big Creek Lake, and we had a good discussion about trail maintenance and federal funding for trail maintenance.  We agreed that the route I had just taken should be a priority for trail work, for a few reasons:  First, all the trails are stock-suitable (were they maintained properly), and having this clear would provide an excellent loop for horsepackers and backpackers.  This is some of the most scenic country in the Bitterroot, after all.  Second, clearing this loop would provide two great access points into the Idaho side, which would expand possibilities for outfitters and recreationalists alike, especially since the trails down towards the Colt Killed trailheads do get maintained.  Finally, the amount of work necessary to get these trails in working order, though non-trivial, would not be prohibitive.  An MCC crew could get it done in a hitch or two, by my estimation, and according to Jim it would be easy to get pack support from the Montana Backcountry Horsemen.  The rock work is excellent because these trails were built long ago by people who wanted them to last.  There’s plenty of good tread and good structures; if the trails don’t get fixed up soon, these may be lost to vegetation.

The last ten miles to the Big Creek trailhead were rather slow and painful.  Fatigue had overtaken me quite suddenly upon reaching the dam at the bottom of Big Creek, and the trail was rocky and technical much of the time.  My knees were really feeling the constant gait changes.

At the TH I was happy to see that no one had stolen or vandalized my bike.  The ride back to the truck was deliberately slow, taking over an hour to make the 13 miles over both washboarded dirt roads, loose gravel (grr.), and nice pavement, for a total of 44 miles worth of human-powered propulsion for the day.